Even though NYFW was somewhat overshadowed by the 9/11 memorial day marking 15 years since the attacks, the designers and visitors did not lose their appetite for fashion. Temperatures were at summer highs throughout, which at times made it a bit difficult to enjoy certain shows, but with the range of events on offer it was always possible to find the perfect show for everyone. 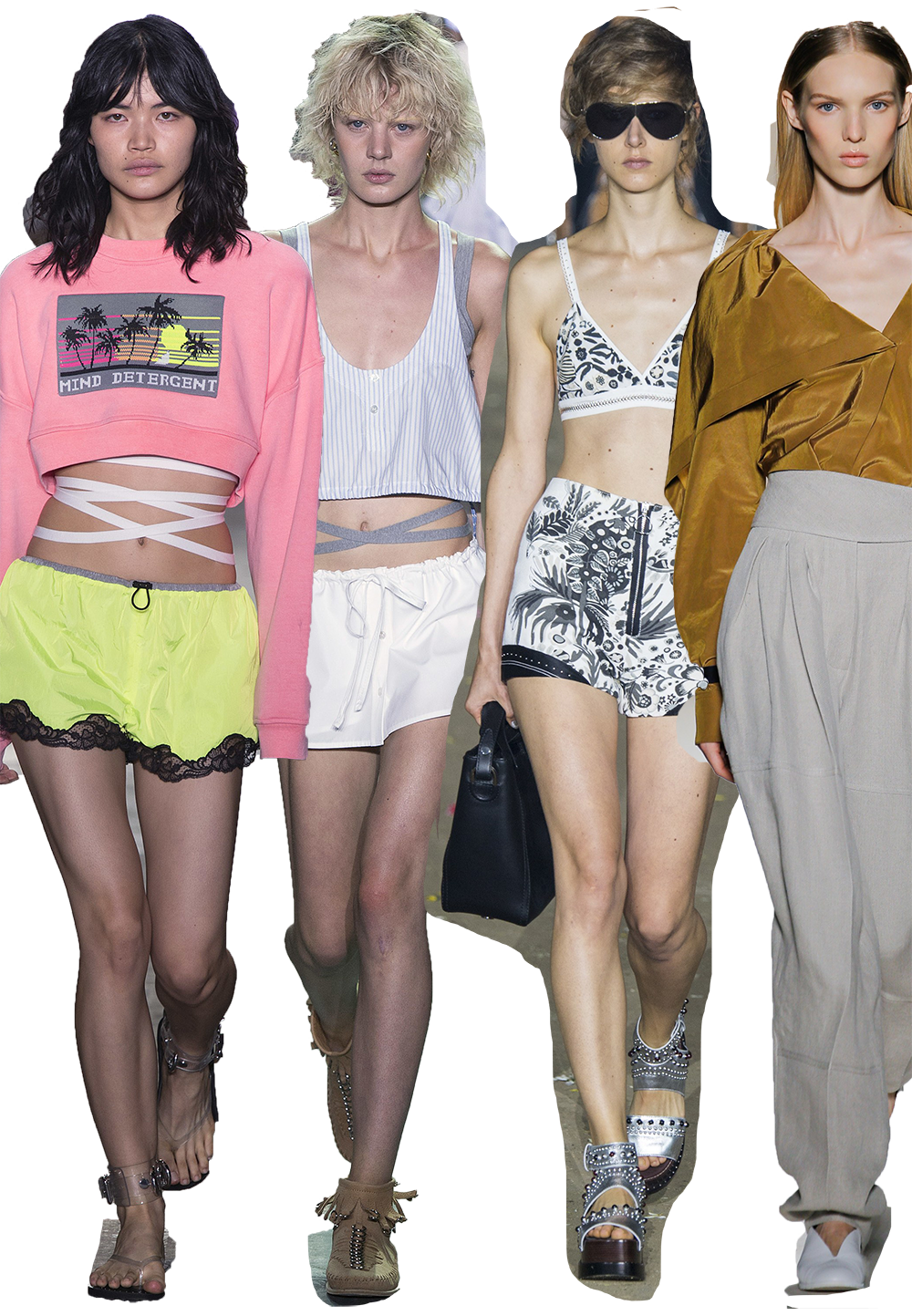 Pull in your belly!
Nothing directs attention to the subtle femininity of a woman quite as well as accenting the waist. Many, many designers went down that road during this year’s NYFW. Diane von Fürstenberg, with her trademark wrap-around skirts did just that, Alexander Wang took it a step further by wrapping not just the waist but the entire stomach with ribbons as well. Victoria Beckham, for her part, played with belts and high trouser cuts that gently accent the hips.

Altazurra turned the belt into the read thread tying together their entire collection. For the new designer duo at Oscar de La Renta the belt was an equally important element. Belts were not that present for the last couple of years, but this season many designer rediscover this classic accesory, which either rested on hips or accented the waistline in many of the outfits we saw. There was no limit to variation and imagination: from eye-catching buckles to subtle wraps to succinct snake prints – it is clear that the belt will be one of the must haves for the up-coming season. 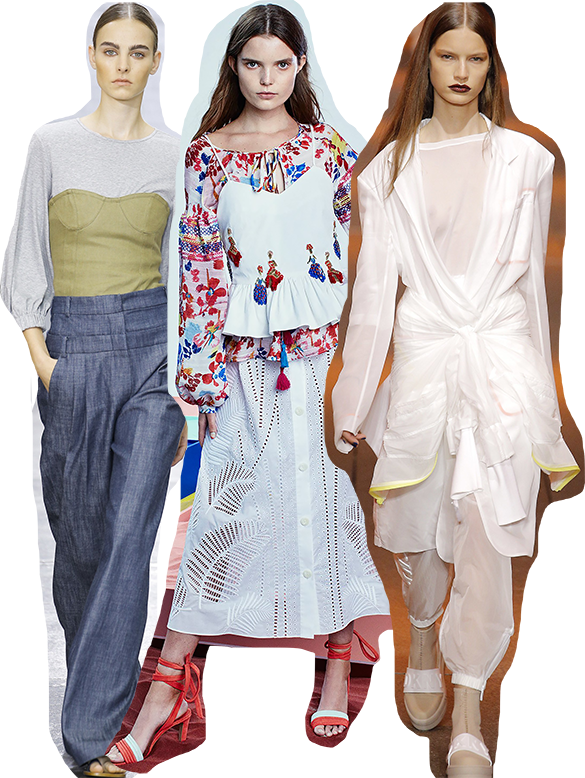 One great way to tackle the cold time of the year, at least in terms of fashion, is layering. This strategy is now also becoming a thing in summer. Ok, so it may not be an option at 35 degrees celsius in the shade, but wearing a light jacket over a dress is definitely interesting option for spring and cooler summer evenings. Plenty of designers show us how it’s done, inspiration is never far.

Slip into a dress!

Already a huge trend this summer, and it will continue into next season: slip dresses, or as some people call them – spaghetti dresses. With cleavage or closed cuts, with laces or ornamental applications – once again there is no limit to the imagination. The only pre-requisite is a slim figure (maybe that’s why they’re called spaghetti dresses. If you didn’t try one this year, you should considerit next season. 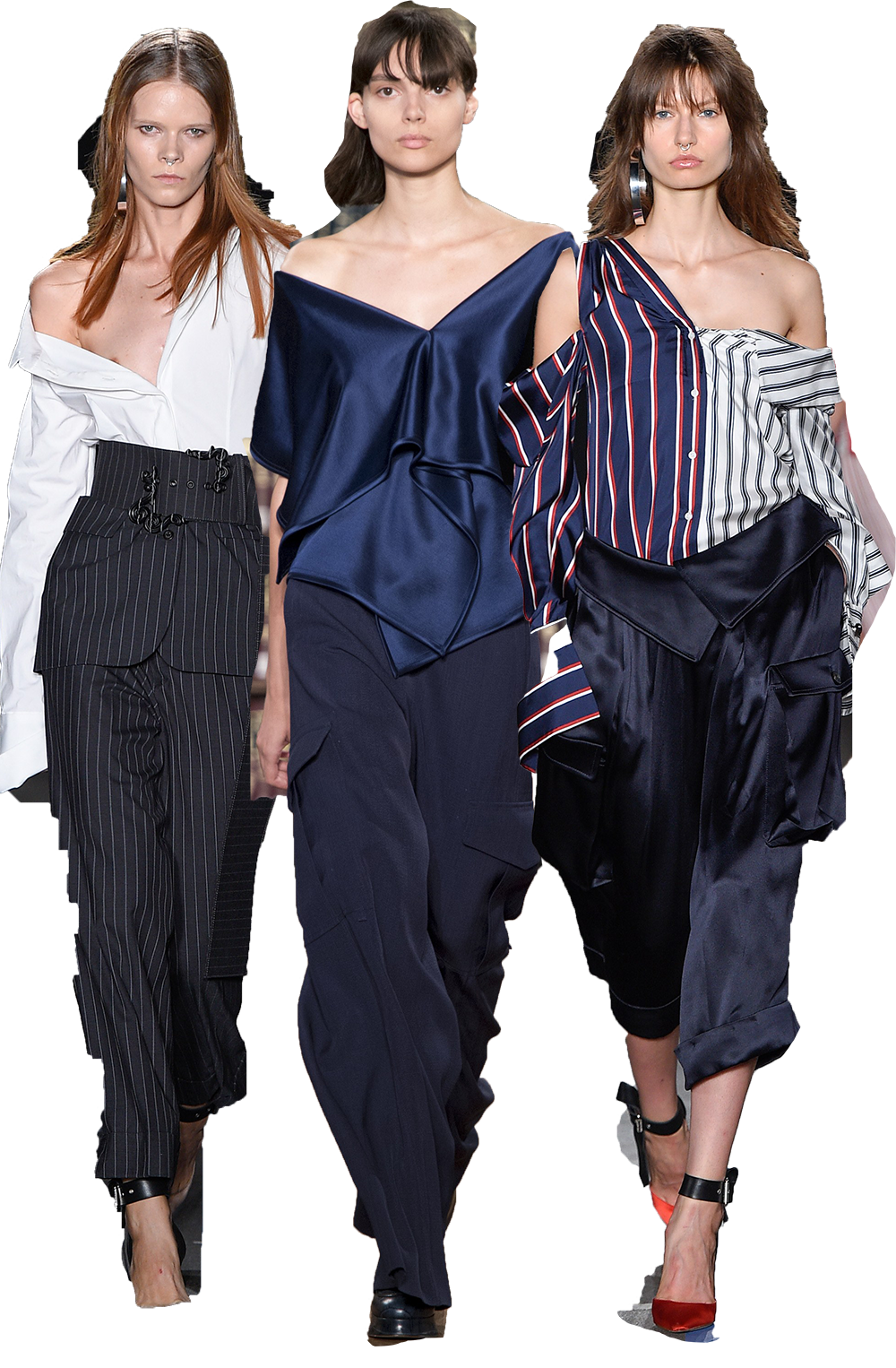 Give me your cold shoulder!
Another trend that was rather ubiquitous this year and will stay with us in the next is the tendency to reveal shoulders. This season we did not see that much variation, but the designers let their creativity run wild: one-shoulder is back, and with it a new sense of freedom for your shoulders. Take your boyfriend’s shirt or an old, baggy sweater, or modify a tank top and let your imagination take the reigns.

Laces are the most girly thing there is. They make everything cuter, more playful and more, well, girly. Next year we will see laces not only on blouses and dresses but also on blazers and skirts. Even masculine clothes will get a feminine touch with the tasteful addition of laces. Get ready to see them in every conceivable shape, color and size. A definite must-have style-element for the season to come.

Sure, we’re going to see quite a bit of skin in SS 17. Having said that, the overall trend moves towards long dresses. Skin is revealed in cleavages or naked bellies. While some designers continue to work with mini’s, it appears that most focus more on the upper part of the body and less on the legs. The length of the dresses ranges from mid-thigh to floor length. There were some expectations defying this trend, but we take them to prove the rule in this case. Either way, next summer season will not automatically mean naked legs everywhere.

Cut us some slack,

The same development we observe with the length of dresses also manifests in the cuts we saw. Tight dresses were few and far between, the trend was towards flowing cuts that gently fell around the models’ bodies. Light and summery instead of tight and sweaty. The shapes we saw evoke feelings of an amazing festival summer, hip dresses, naked feet and long evenings spent dancing at the lake. 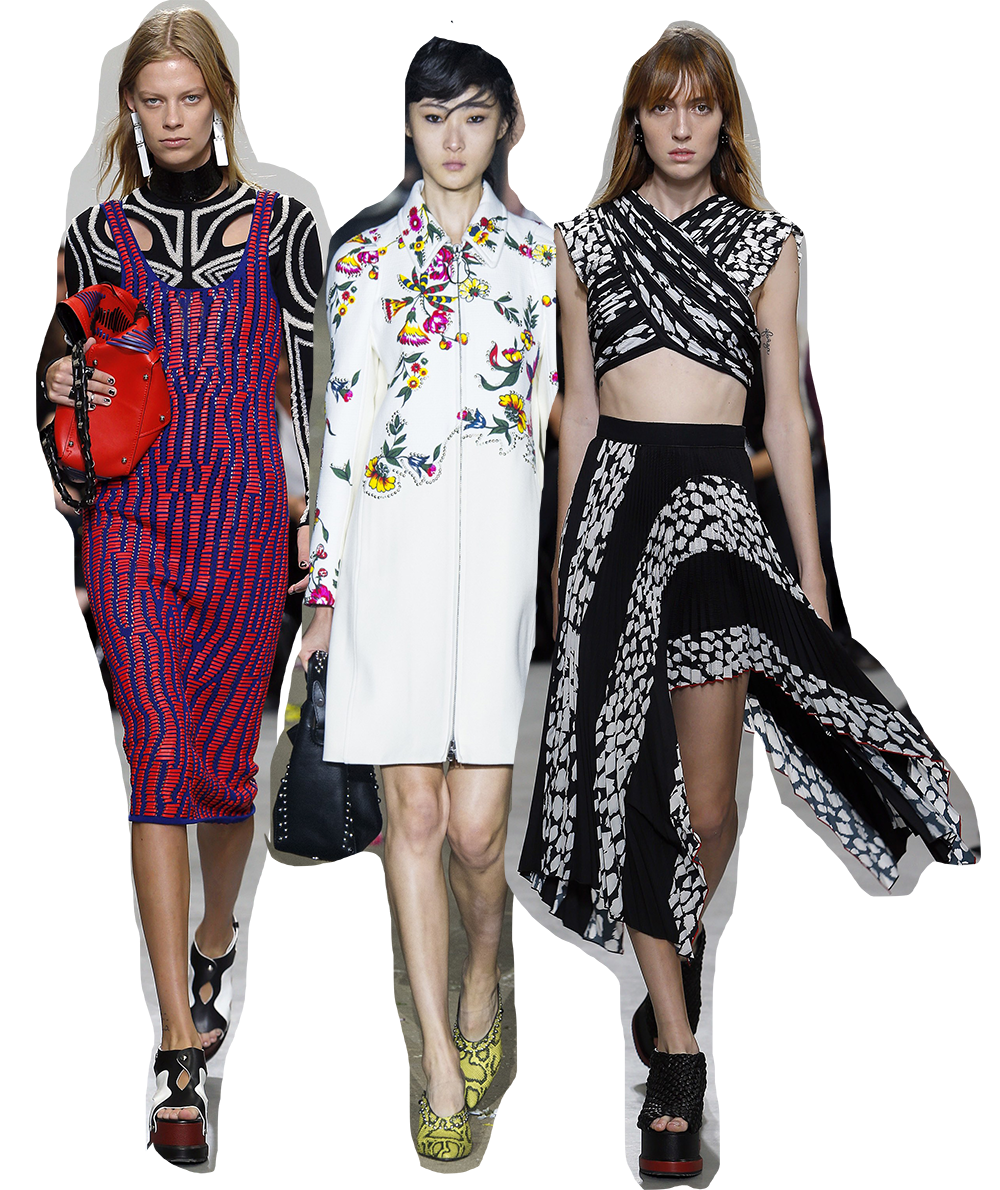 One of the big disputes in the fashion industry right now is the question: single-color or patterned textiles? Often the answer is a mix of both, some designers opt exclusively for patterns, others hate them and never touch them in their work at all. No clear trend emerged during NYFW in this respect. However, it was noticeable that when it comes to patterns all designers went for smaller motifs rather than large scale patterns, with particular prevalence of graphic or floral patterns. Proenza Schouler, for example, showed a real wealth of patterns in her collection. The range of single-colors was practically unlimited, it felt like we saw every single color there is on this planet at the shows in Big Apple. Theobvious motto: summer. Victoria Beckham, to pick an example, stayed true to her line and showed mostly single-color looks and barely any patterns.

Buy Now
Not a fashion trend, but worth including here: the See Now, Buy Now Show. Tommy Hilfiger and several other designers opted for this form of presentation, which allows interested buyers to purchase their favorite pieces straight off the runway without having to wait until they hit the stores. How is it possible that no one ever thought of this before? It would be great if the other designers would follow suit next year. We’ll see!

Besides the runway: tribute to Bill!
Barely three months ago, on June 25, street style photography legend Bill Cunningham passed away. In his weekly column for the New York Times, Cunningham regularly presented his analogue snapshots to a wide audience. Every New Yorker, every visitor to the Big Apple dreamed of being photographed by Bill. Humble as he was, the photographer lived in a small, very basic chamber, and headed out hunting for motifs on his bike on a daily basis. The blue jacket as worn by the bin-men in Paris became his signature. What better way to honor this legend than with a nod to his trademark piece of clothing? On day one of NYFW many photographers wore blue jackets in tribute to Bill. 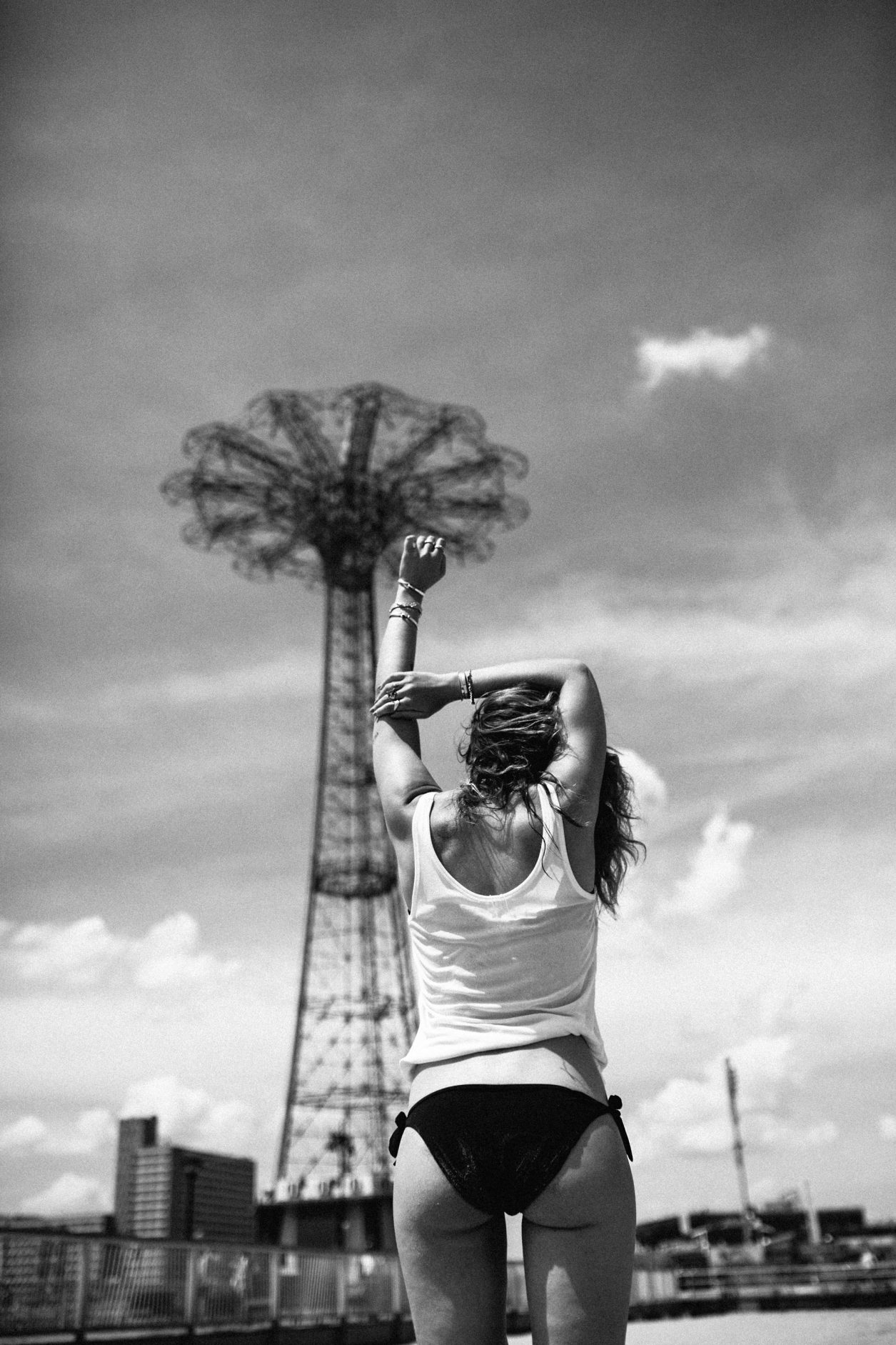