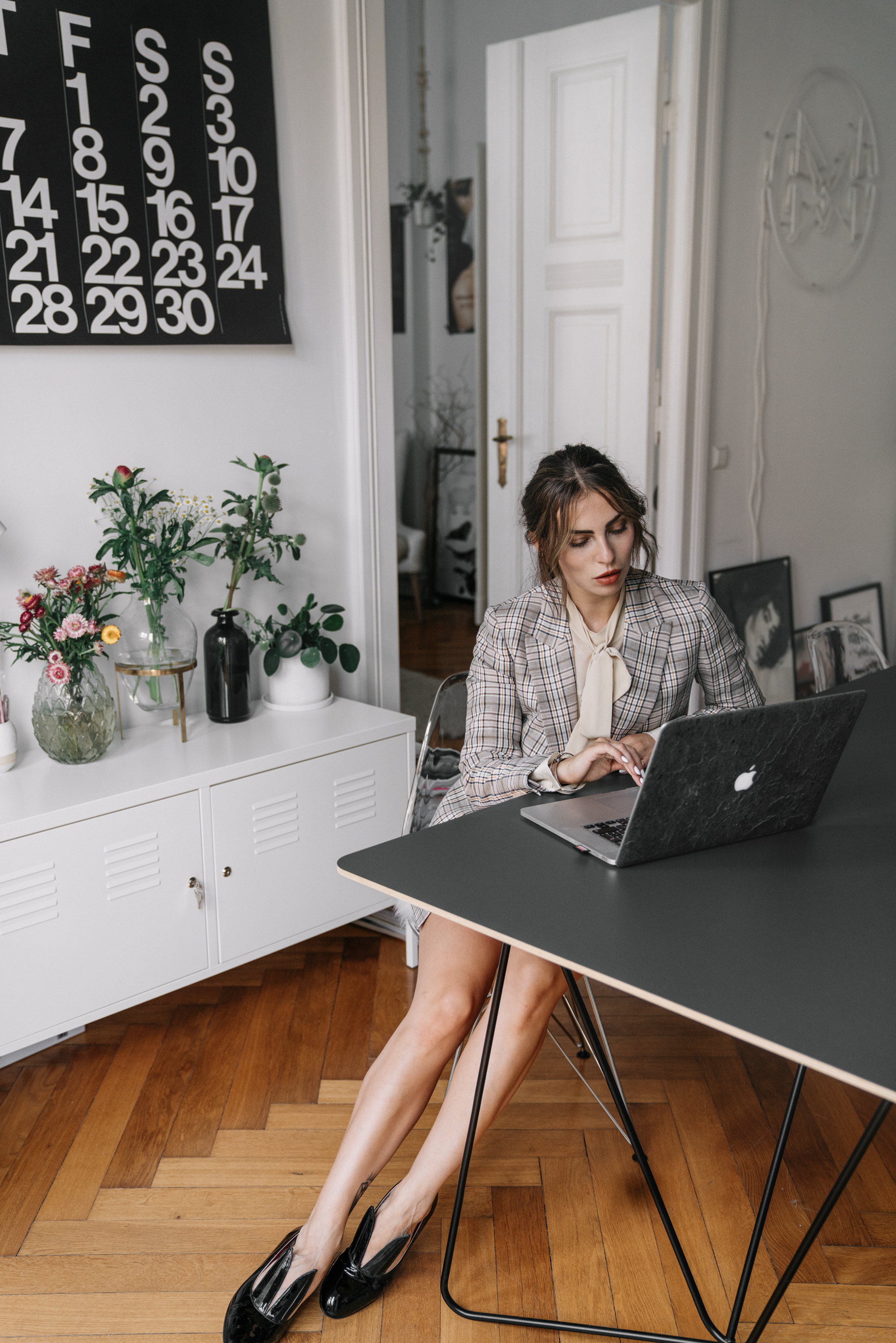 I‘m sitting at my table, letting my gaze wander around the flat. Quite a lot has changed in here since my last interior post. Some of the differences I perceive reflect the changes in my private life which so characterized my last year. There were a number of them, but the separation from my ex-boyfriend was probably the most profound.   This separation has led to many small and bigger changes in my daily life, but the most substantial impact has been on my life inside my own four walls. After all, we had lived together for 4 years, and now I was alone again. Saying goodbye to my old love also meant saying goodbye to a number of (beloved) pieces of furniture, while welcoming others into my home. My living room and office were particularly affected. I’ll make sure to show you my living room in a separate post (it’s not quite finished yet), but right now I’d like to invite you into my office, a room that I am really proud of! 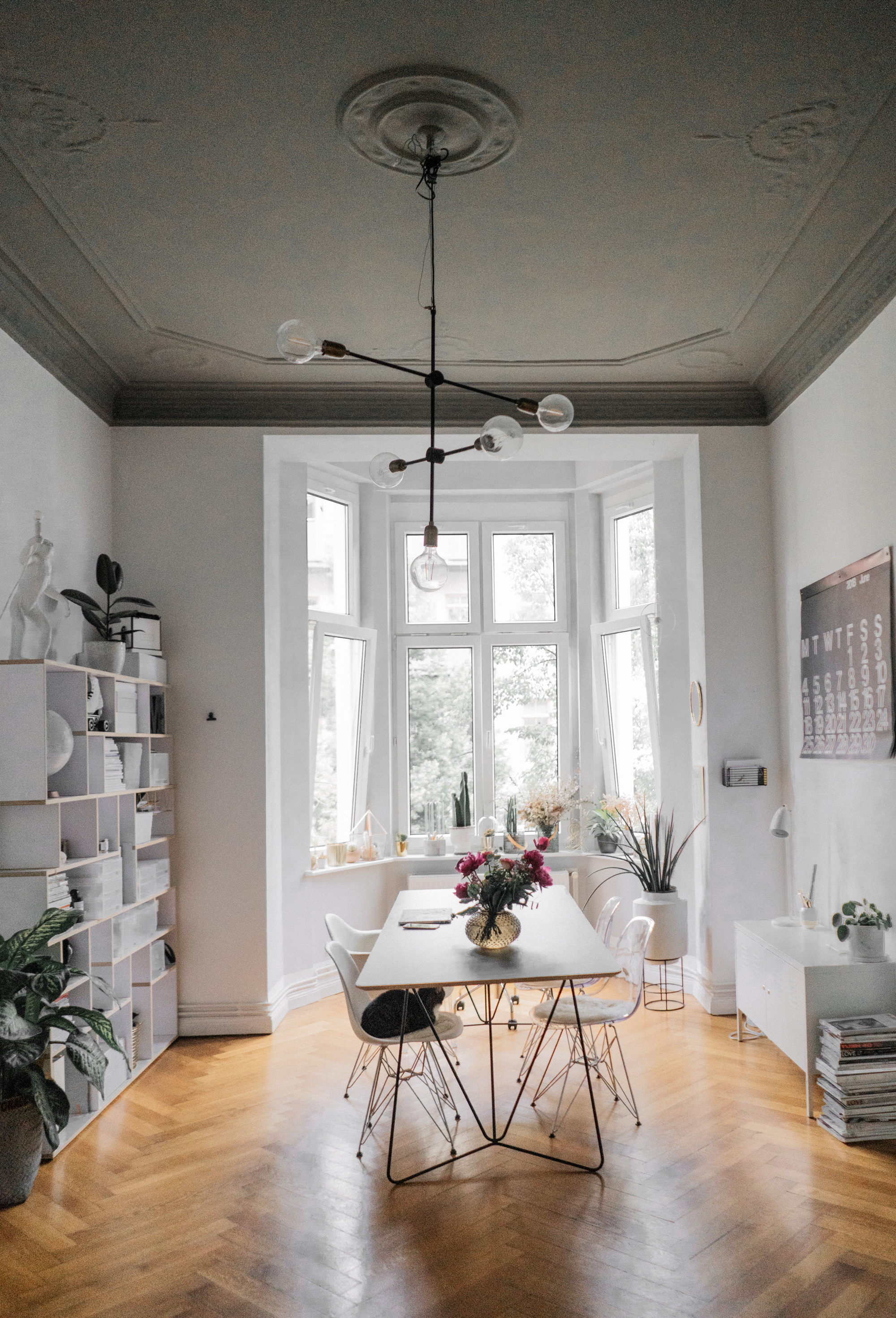 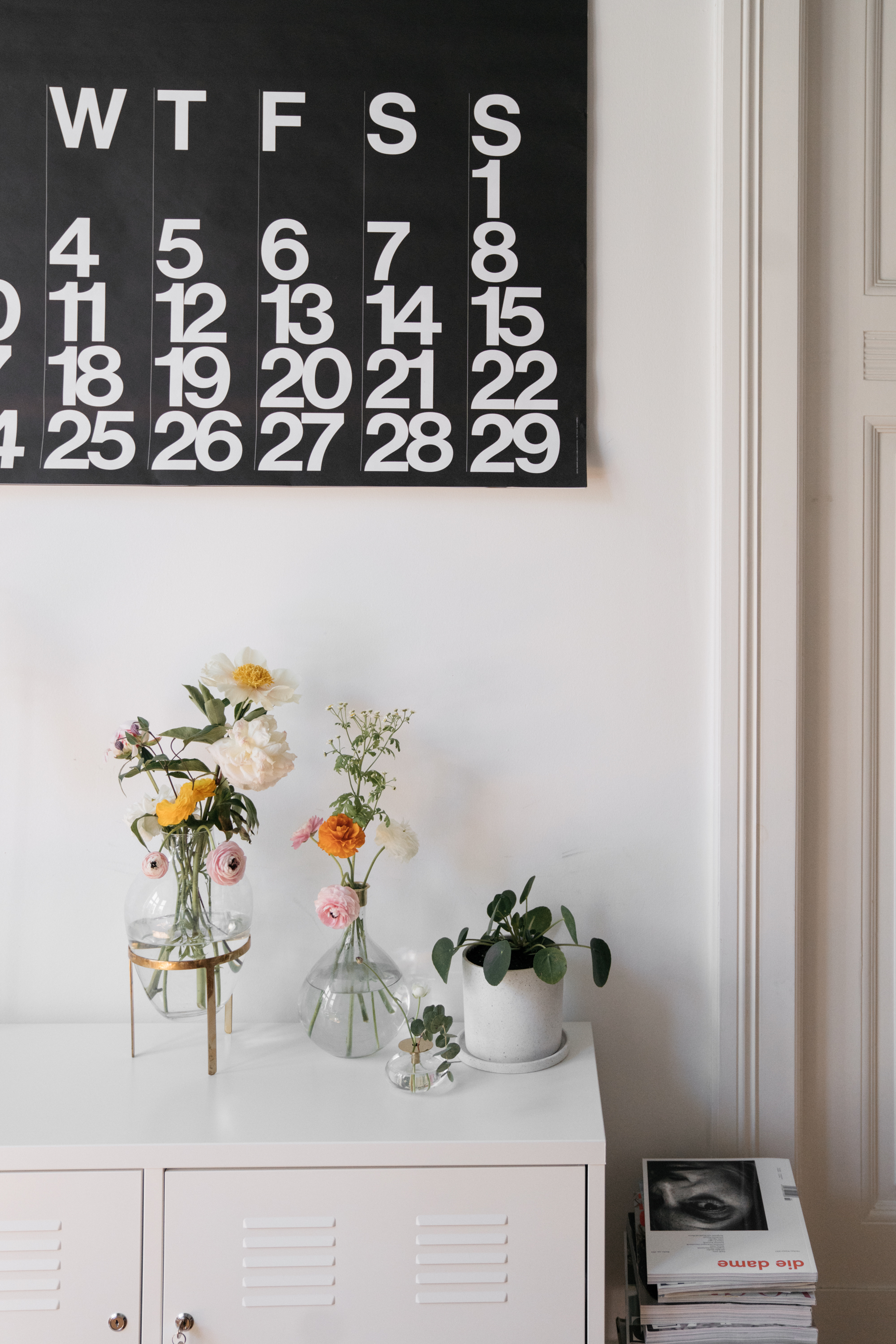 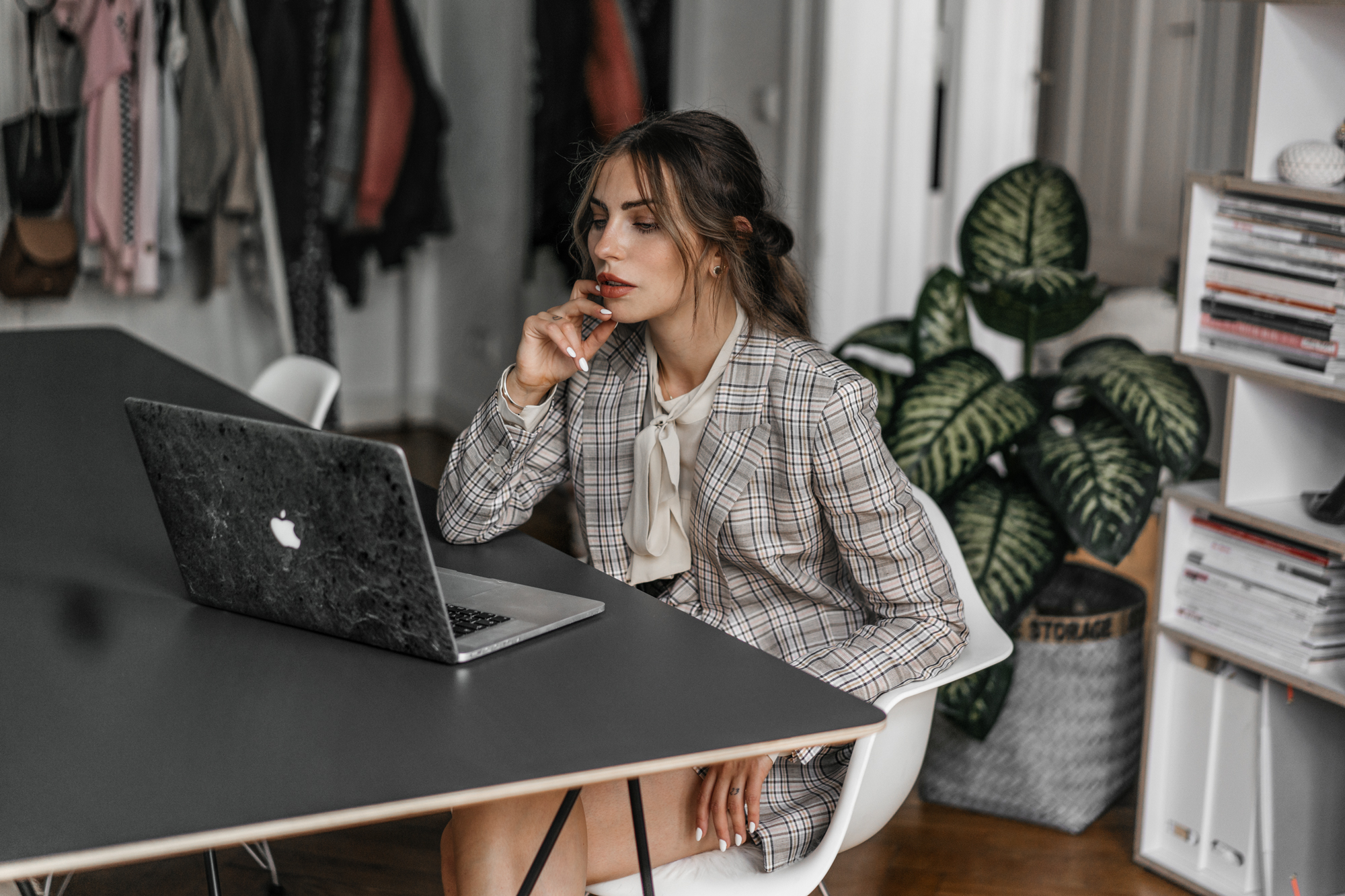 Change, in this case, would have to start with a bunch of stronger elements. Said and done, I scrapped the pink and gave the room a new coat of paint. I opted for a grey-green ceiling, which I felt works perfectly with the other rooms, and since I’m generally a fan of that particular tone anyways. Why the ceiling? Because it is a statement, and an unusual one at that.   Many have advised me against it, to be honest. The main consensus was that painting the ceiling in that color would make the room smaller, and many were sure that I would regret it. But I achieved exactly the desired effect: I wanted to create a cosy work environment, a space in which I would not feel lost. So, instead of reaching for the regular option – white – I went for darker tones, and am super happy with my decision. The room is very large and high anyways, and I don’t feel at all that the dark ceiling is in any way oppressive. On the contrary, I feel it makes the entire space special and atmospheric. 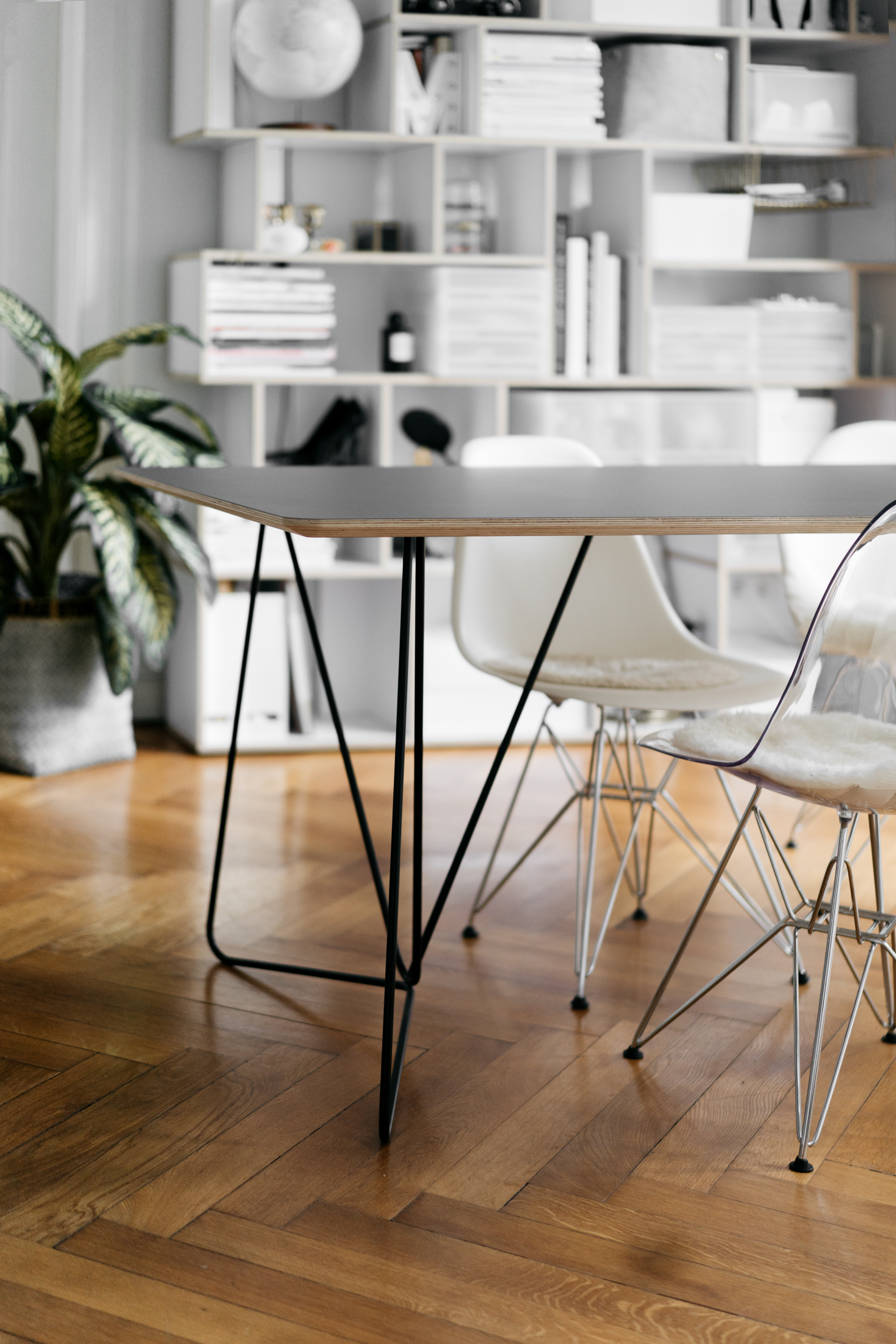 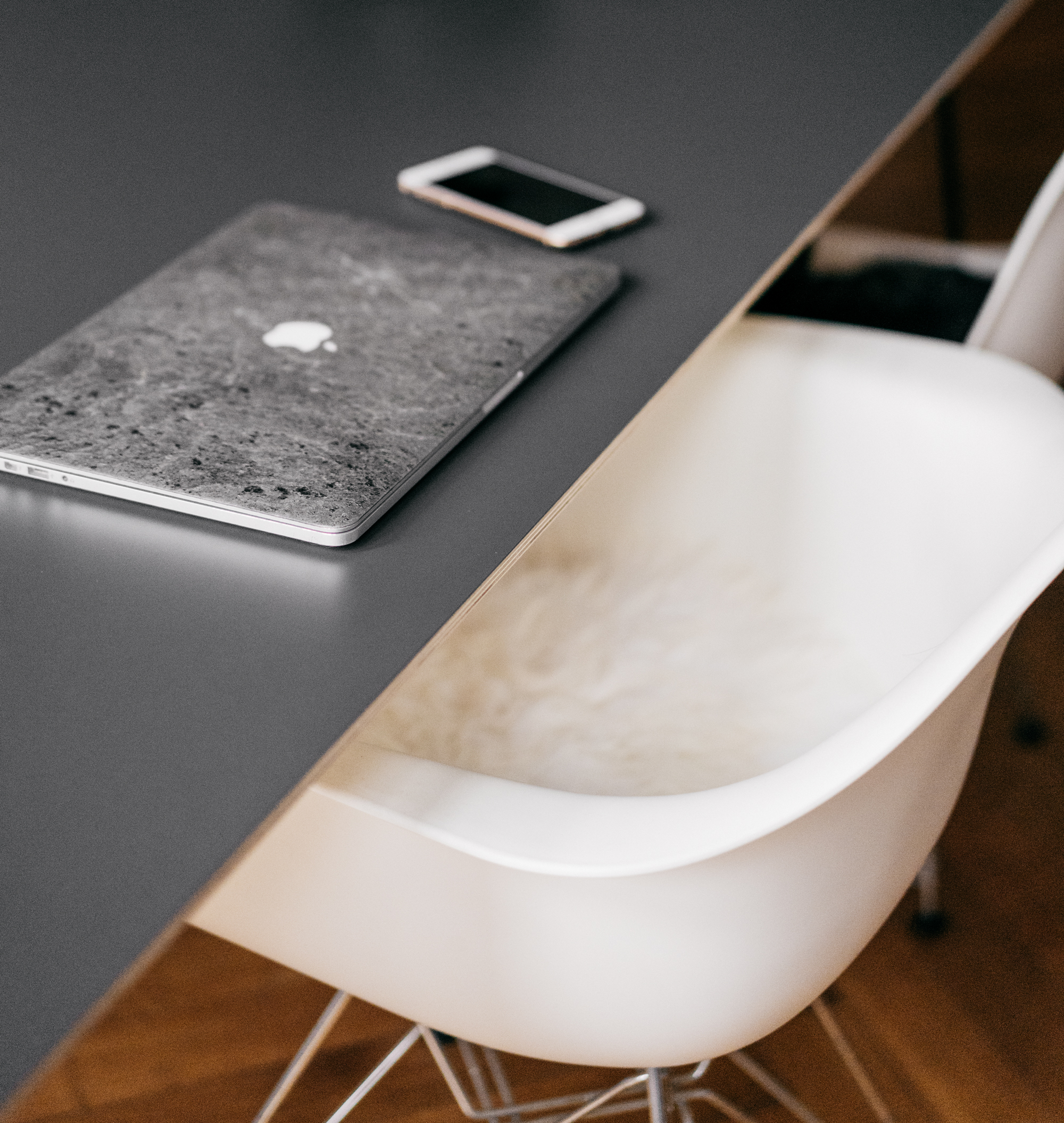 Ando is exactly what I was looking for: a dark element in an otherwise light room, a table that is large, yet elegant and slender in form. It is contemporary and timeless all at once. It is large enough for 4 people to comfortably work on it and for 8 people to eat on it at any one time.   The latter point was also a crucial one for me – I love inviting friends over to cook together. On those evenings, my office is converted into a dining room in no time at all, and Ando (the label is called Raumfreunde) becomes a stylish dinner table.   And talking about style: the surface are of the table is coated in high-quality, dark-grey melanin, so it’s not a big deal if a little wine gets spilled on it. The surface is visually impressive as well, in fact I already used my Ando for a good few flat-lays. I guess Ando likes being the center of attention. 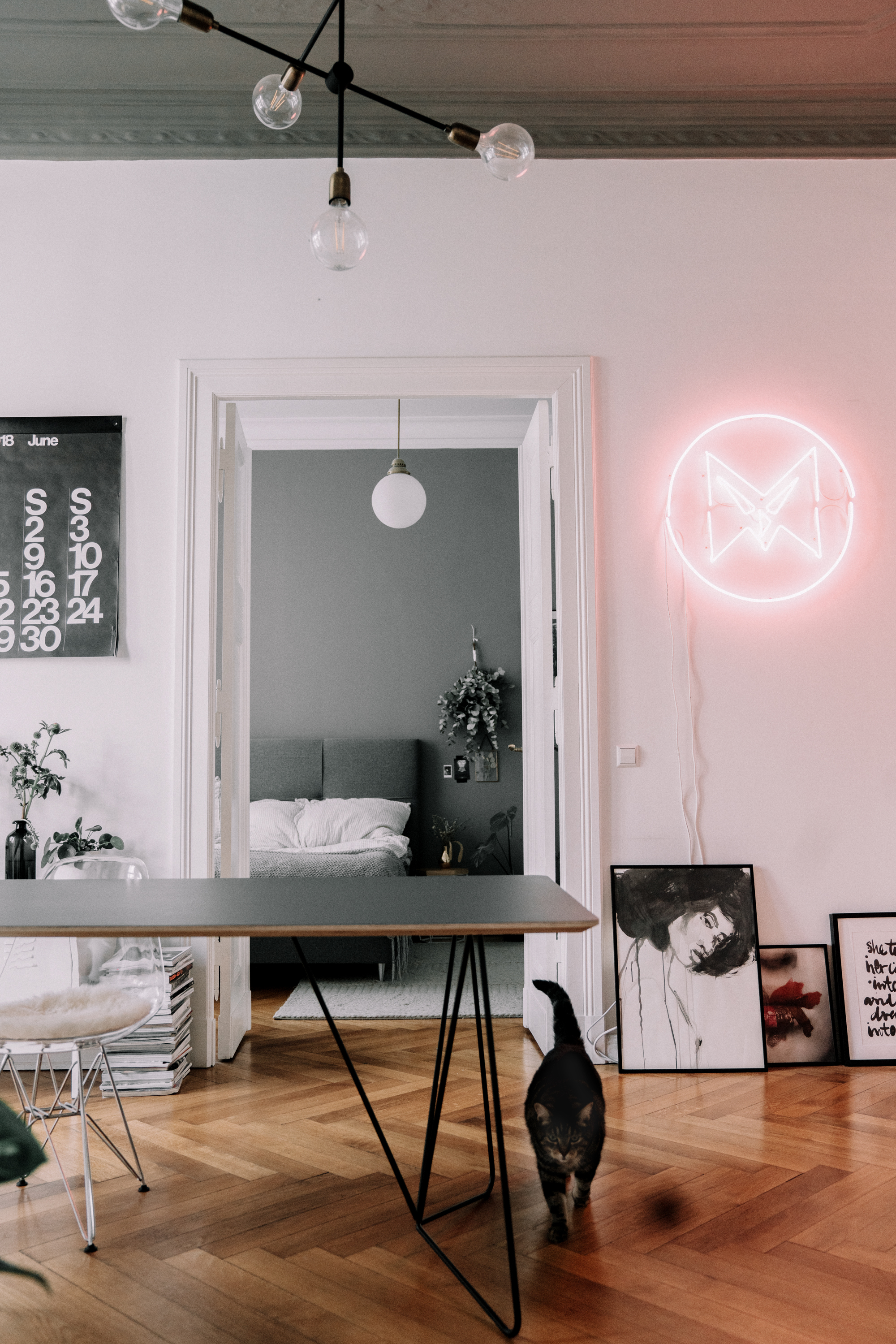